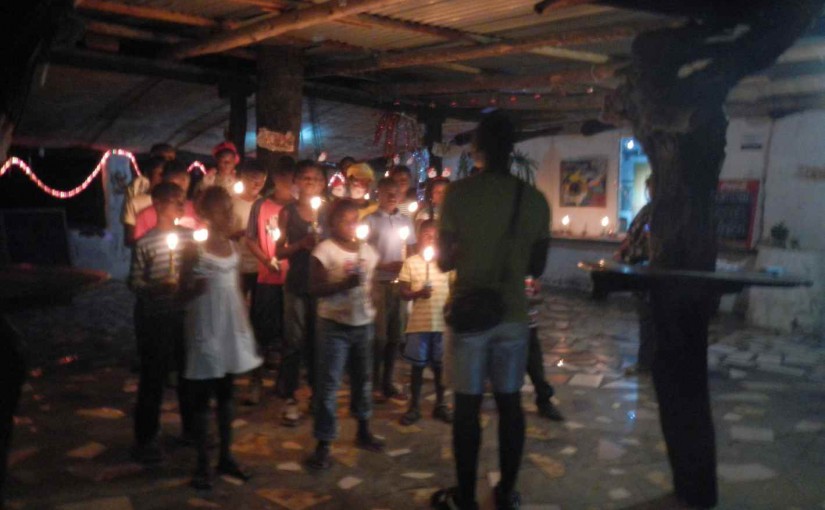 My dear friends,
I hope this finds you all well …

Here in Chimoio I’ve had a great time celebrating Christmas with the children, first on the 24 th with those that have come of the street and are now living on the Loving the Nations property and then on the 25 th with those from Iris Ministries. Lots of presents, sweets and food -­‐ as they like it ;-).

God’s been good to me, taking care of me & those with me in every way. I’ve been invited by the owner of Casa M’sika to come back with the children for another night of Christmas carols & candlelight dinner. The kids did a great job singing carols there, some even in English, which took quite a bit to teach them, but they did well. They had fun going for a walk to see the animals, swimming in the pool and just enjoying the night out in such a beautiful place. I praise & thank God for such a privilege once again …

On the new property … We finished the 3 rd house and the guest house is almost finished, too, this week they’re digging the foundation of the 4 th (house and last one for now) … prices have gone up a lot and building is challenging now … we’ve been given money for the house, but when I made the estimate prices were very different, like wood is twice as much now) … either way we’ll somehow get it done as always … .
At the moment our carpenter is busy making beds for the children … then we’ve to buy matraces …
See the beautiful Machessa (the thing with the straw roof) on the picture. tt’s already been used for a wedding … Carlos, the guy who stays there with the children got married, in a non-­‐traditional way, just doing the wedding ceremony before God and us praying for / blessing them … it was beautiful … and a great example for the children … that even if you don’t have money you do what is right before God, making an alliance with testimonies … .
Pray for more workers that have God’s heart for the children … .
The legalization of Loving the Nations here is also moving forward. Finally we have the paper from Social Welfare here (they came to visit & inspect and hardly criticized anything – which is a miracle to everyone who knows how they are – to us it’s an answer to prayer) and once again all the papers are on the governor’s desk to be approved. Please pray with us for a positive response and that he or anyone won’t ask for another paper, would you?
Maybe let me mention one more thing … the director of the justice department who refused to sign our paper was transferred and so was the director at social welfare … the week I went back to social welfare ‘cause I needed a permit from them for the police to take the children to Messica and they spontaneously decided to come out to the property with me they had just gotten a new director who worked the first day and didn’t know much, so signed anything she was asked to … how God organizes things … I love it … it took a long time, but He finally put everything into place … !

Since I came back from Europe mid august we’ve had 2 baptisms in the prison, an amazing Christmas service with about 700 prisoners sharing the good news about Jesus with them and leading them to start a relationship with Jesus as their Lord and savior. After we finished the lady who is in charge of basically everything that is going on inside the prison (who works closely with the director) said to our inside pastor that this coming year she’ll be participating in the bible studies I’m doing in the prison. And the officials asked me if we can’t also go to the other prisons in the province of Manica (where we live in) to preach there. Hm. Yes, I guess so. God has given us so much favor in this prison, anything we ask we’re allowed to do and on top of it they’re asking us to do things. In November I did teaching & training with all the pastors & leaders inside there (it’s a big prison, there are 1800+ people there now). Each part has their ‘pastor’ that takes care of the sheep … things are getting organized ;‐). 24/7 prayer is still going on there … and I don’t remember when it was, but a few weeks ago they thanked us for coming and acknowledged that this year was the first year they didn’t have something bad happening in September there; every other year in September people tried to escape and there was fighting inside there … and they said it’s because of prayer and what we’ve been doing … I think it’s because of what God has been doing, but either way they (and we) give the glory to God!!

The youth services are moving forward, too, lots more people participating lately and more & more getting the vision of working and praying together in unity. Each service has been special. On the last one people just didn’t want to go home, they kept on worshipping for a long time after we had already officially finished the service … 🙂

We finished the 2 nd part of the discipleship group on Sunday nights … there has been such a depth, which is very very rare here.
In January I’ll be continuing with other teachings, opening up again for new people come.
Lately the Lord has been sending more and more people to my house that are hungry for more of Jesus, want to know the truth and counseling. I don’t know where this is going … .

In October we went to the district of Sussundenga, Dombe and Moussorize to do evangelism … the team was great, we didn’t know what we’d eat, but we were well fed, didn’t know where to sleep, but it all worked out well … and what is the most important thing … many found Jesus :-).
At the first place we went to we showed the Jesus film and ministered on a soccer field that was right across from a bar that had blaring loud music on in the afternoon (there was no electricity, but they use an old car battery), but they switched it off once we started and all came to see the life of Jesus. There was a lot of repentance and deliverance that night … God loves these people out there in the bush, forgotten by the world, but not by God … !
I could write you lots & lots more, but I don’t want to bore you … as usual I & we went to many places to preach and teach and each time God spoke and moved … I am truly grateful to the One who sits on the throne and reigns from eternity to all eternity, the One who was and is and is to come … .

I trust that God will be with you in 2016, He’ll lead, guide and direct you every step of the way, provide for you, love on you …
May He give you all the grace & strength you need and his peace be with you,